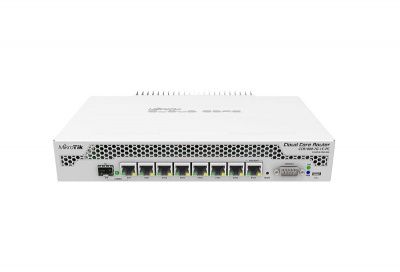 The new updated revision of CCR1009 is here. We attempted to combine all the customer feedback and best practice in CCR device manufacturing that we learned over the last three years, since the first CCR1009 devices were launched.

No switch-chip - the device now features only fully independent Ethernet ports each with a direct connection to the CPU, allowing to overcome previous shared 1Gbit limitation from switch-chip ports and utilize full potential of CPU processing power on those ports.

Combo-port - a single 1Gbit software interface that has two hardware interfaces - an SFP cage and a Gigabit Ethernet port, allowing you to use any type of connection available to you. It is also possible to switch between both physical interfaces in RouterOS. In an event of disconnect the combo-port provides hardware fail-over feature.

100Mbps SFP support - this is our first device that supports 100BASE-LX/100BASE-SX/100BASE-BX fiber modules, as well as standard 1.25G SFP modules.

More throughput - because the ports are now directly connected to the CPU, the new CCR1009 can achieve even higher throughput.

This unit is equipped with passive cooling enclosure, two heat-pipes and a specially designed heat-sink, so its completely silent. It’s powered by an external 24V 2.5A AC/DC adapter and supports power redundancy if you also power it from the PoE input port.

We offer free consultation and friendly advice on all our products and services. We pride ourselves in sharing our knowledge and experiences with our clients.

Do you offer Discounts?

We give big discounts for volume orders.
We also have a non exclusive reseller program on some of our products. If you want to become our re seller, please contact us.

How to place an order

All the products listed here has a Lazada link at the bottom. We use Lazada Platform so our clients can took advantage of Lazada COD and their proven delivery and return process. If you prefer other method, please contact us so we can assist you with your orders, payment and the delivery method you prefer.